I like tinkering with hardware, case modding and water-cooled machines. Here are my favourite builds. 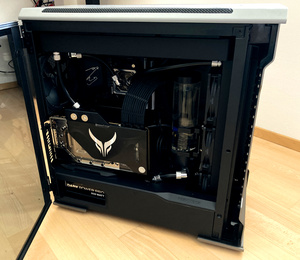 This started as an all-AMD build with Radeon RX 5700XT chosen as GPU and the infamous ASRock AQUA limited edition premium motherboard and then very quickly turned into a true nightmare.

I wanted to get rid of the proprietary NVIDIA drivers on Linux and finally have the ability to give Wayland a try but I was having so many issues that it just didn't work out. I'll most likely write a blog article about this, so long story short I had to switch the board three times and the GPU twice to end up with a working setup. And yes, I'm back on NVIDIA. So sad...

As of writing this not all issues have been resolved: the system still requires two power-ons to POST with video output but apart from that it is very stable and expectedly beefy in terms of performance. 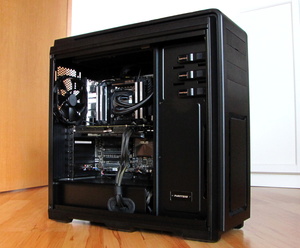 For this machine, I took the money I usually spent for water cooling components and put it into hardware. The result was a truely exquisite choice of premium components - at the cost of having a minimum of additional noise.

Regarding visual appearance, it surely can't compete with a water-cooled build, but who knows - maybe this lack will be fixed some cold winter...

Concerning overclocking, this machine is fantastic: the i7-5820K went from stock 3.3 GHz to 4.4 GHz just by setting a higher multiplier and raising Vcore to 1.950 V. I think there is still some headroom left, but I prefer a stable system to a whacky overclocking record. 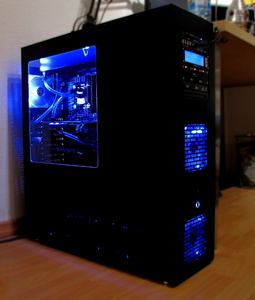 Given this uncompromising case I chose to be alike when designing the water cooling: three quad-rads, 15 fans controlled by an quaero 5 and three PowerAdjust II.

Sometimes I really miss this build...

The drawbacks of that really extreme case were the lack of some little details like dust filters, the fact that you have to unscrew 11(!) screws to remove one side door, and the weight: with all that rads and stuff one simply did not want to move that thing anywhere. 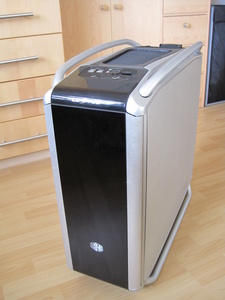 A reincarnation of Thor I with new components and some modifications to the case, e.g. more vent holes drilled into the top and an even bigger radiator (45mm thick Phobya triple). As hardware was getting more energy-efficient and cooler that time, the temperature problems were almost gone.

Sadly that build died one day when I tried to include the motherboard in the water-cooling loop. Turned out I had picked components for the wrong revision of the board, and did not mount a block on the EPU.

My first water-cooled build after a long period of air cooling. First attempts with a 220 dual rad did not take the 130 W TDP of a hot i7-920 and 236 W MGCP of the GTX 280. Even with a 360 triple-rad the system still had some temperature problems. Looking back from now I can say that the case just did not fit the needs for air flow.